There are some beauties on Netflix this month.  Here is one from one of my favorite actors of all time, Charles Bronson.  I have seen most of his films but somehow missed this one.  “Messenger of Death” is the story of this family in a private Mormon community that was was slaughtered by two evil and mysterious visitors wielding shotguns.  They destroy 3 women and 6 little children.  Like most Bronson movies, there isn’t much left for the imagination in this brutal scene (although they spare you the imagery of the kids actually getting hit with bullets).  Bronson plays a station wagon driving (with wood paneling) reporter who covers the story, and (big shocker) decides to take matters into his own hands.

Like most Bronson movies, the police fail to handle the case correctly due to the laws holding them back. In this case, they have to release the prime suspect from custody unless they planned on charging him with something, plus they say that the crime was outside their jurisdiction (which is kind of hilarious because they worked the crime scene.)  Of course Bronson thinks all of this is bullshit.  Even though Bronson knows the prime suspect they let go isn’t the killer, he is convinced that its one of two Mormon brothers, both blaming each other for the crime.  Bronson eventually gets wrapped up in trying to prevent a group of angry Mormons from hunting down who they believe committed this crime.  Things heat up when an elaborate scheme starts to unfold revealing the real motive behind all that has taken place.
Not my favorite Bronson movie by no stretch, but definitely not a stinker.  I think my problem with the movie was just that Bronson was way to laid back in this.  He lacked the bad ass element and horrible dialog that he was known for, especially for being a Cannon release which was known for being his worst (best) work.
Perhaps the icing on the cake in this movie, is when a character during a fairly climatic scene puts a gun up to his temple and pulls the trigger which results in a bang, s teeny puff of smoke, and perhaps the weakest bullet on earth as it doesn’t exit his head.  One of the more ridiculous scenes I’ve encountered in a movie.  You still get to see a few classic Bronson hand to hand combat scenes so the movie doesn’t totally disappoint.  This is one to watch on a lazy Sunday.  Not a classic, but enjoyable.

Our Bronson shirts are available on our website, eBay store, and Etsy stores.

I have a lot on my mind these days.  The major one is that I have a kid on the way that is due any day now.  I also have the holiday rush here at supersweetshirts.com happening any day now as well.  With all of this going on, there is a third thing that was brought to my attention just this week that I cannot get out of my mind as well….

Let’s talk about how awesome this is.   Of course my primary reason for blogging is to occasionally mention the awesome products at supersweetshirts.com and also at our etsy store , but occasionally a product comes around that is well deserved of a third party plug.  “TapIt Cap” is worthy of this.  Its like a mini draft system for your home.  I love growlers, but a big reason as to why I don’t get them more often, is because I can’t finish it up fast enough to maintain the freshness.  Let me modify that statement, I CAN finish a growler without a problem, but maybe I just want a pint or two?  Maybe every time I open a growler, I don’t want to get bombed.  This device will keep your growler fresh and let you drink at your own leisure!  Genius! The best part?  Its not even that expensive retailing at 45.00 at Tapitcap.com .  This is a great gift for any beer lover!  On a side note, the perfect gift to go along with this would be: 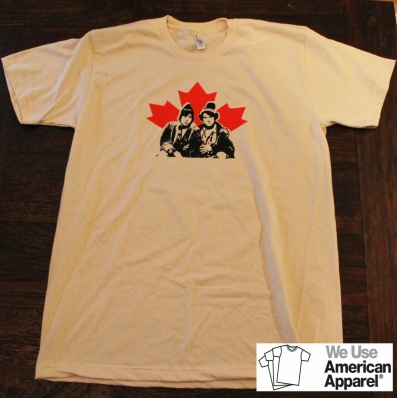 Available in our etsy store!

We dropped a bunch of items in our Etsy store in the SALE section, check it out.  These items are limited to the size in the description, so be sure to check that section out first because supplies are limited and they go fast!  I’ll be adding new items all week until I clear some of this stuff out of here!

Keep an eye out in our Etsy store.  We have added a new Sale/Clearance section which will always have random items in it either from just over stock, things we aren’t going to carry any longer, or prototype designs.  I decided to do this because we have a lot of random stock laying around and its time to make some room.  The items listed are all brand new and only come in the size specified in the listing.  Be sure to check in every day because I will be adding different things throughout the week.  The link for our Etsy store is:  http://www.etsy.com/shop/aflow01 .

The Super Sweet Shirt Co. Would like to wish everyone a safe Holiday!  Don’t forget about Friday’s Black Friday Sale for free shipping on all items domestic!  This is only at our eBay store and our Etsy store!  “Like” us on Facebook for coupon codes and details! 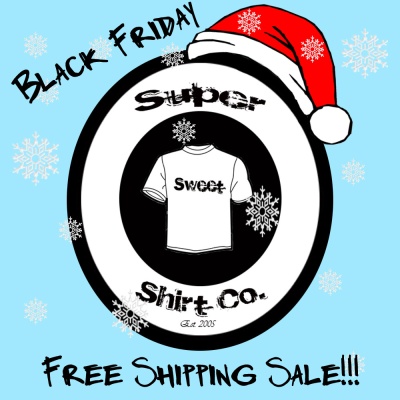 At 5pm we will be closing the etsy and ebay stores for 7 days because I am going out of town starting Friday.  We will reopen those two shops on Wednesday, May 11.  The website itself will have an alert on the main page and I will be answering emails while I am away so any questions will be answered as always.  Thanks!