Over the summer, my parents gave me an old fridge that was in their garage.  I also had a wife that (rightly so) complained about me hogging the fridge space with all my beer.  So it only made sense to put a second fridge in my basement dedicated to the housing of delicious beers.  I am an I.P.A. drinker, but the problem with that is, you really cant keep a large amount of I.P.As in there because they really should be consumed as fresh as possible.  You don’t want to let them age.  I have started broadening my horizons when choosing beers to bring home, branching out to stouts and other things.  While at the beer store, there was a rep from Bronx Brewery handing out some samples of their Pale Ale and the Scotch Ale.  I sampled both beers which were poured from a growler they brought.  The Pale Ale was full and delicious.  A nice balance of malts and hops, and for an American Pal Ale (which I normally hate), it was very good.  The Scotch Ale was also impressive, but like the Pale Ale, it didn’t taste like your traditional Scotch Ale.  It resembled more of a malt heavy I.P.A.
Both beers out of the growler tasted pretty good, but when I got home and cracked open a can, the taste was dramatically different.  It wasn’t awful by no means, but was not something that I’d probably revisit.  The Pale Ale that I purchased was overly malty, and resembled my first home brew batch that I had done last year.  After the first can, I was on the fence, and hoped that my second can would be a little better.  It was actually worse.  This could have been my palate at the time, and I have two cans left (4 pack) to decide, but my overall impression of this beer currently, is that it falls short of being decent.  A valiant effort.

The last thing we did on our San Diego trip was the thing I wanted to do most….our trip to Stone!

When I think of craft beer, Stone Brewing is one of the first breweries I think of.  They are like the Bruce Lee of brewing.  They took a look a traditional craft brewing at the time, and tossed all rules and tradition out the window.  Setting themselves apart from the rest, they are true icons of the craft beer movement.  This was the nicest brewery I’ve ever been to.  It was sort of hard to find the place, not because it was complicated direction-wise, but the building looked like some cookie cutter office park and we had initially driven past it.   Parking was almost impossible as the lot was totally full.  Once we got in, it was like stepping foot into Willy Wonka’s Chocolate Factory.  Ok maybe not that extreme….but I was pretty happy.  The eating area is amazing with a huge outdoor section in a lush Japanese garden that actually had trails which led to little social areas with fire pits, chairs, mini bars, it was awesome.  We sat down outside, each table having one of those heaters in case it was a bit chilly.  I wanted the beer on cask which was some sort of special IPA with ginger (if I remember correctly), but they were out of the cask.  I was upset..but not really, there were tons of beers to choose from.  The cool thing about stone is that they carry other craft beers from other brewers.  I was in the mood for a cask brew….

I was able to find several different IPA’s to enjoy and we also sampled some others.  You were able to get sample flights of basically whatever you wanted. 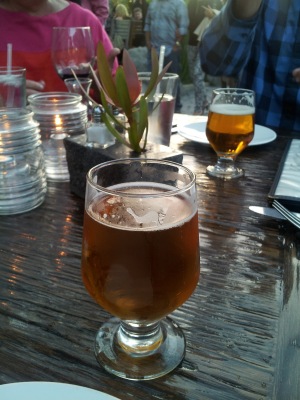 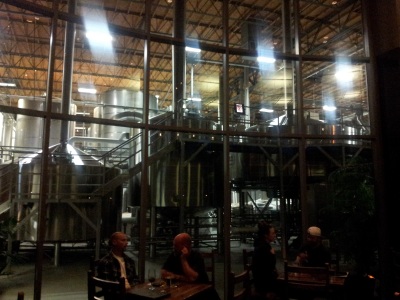 The visit to Stone was pretty awesome.  I was not leaving San Diego without stopping here!  The Merch Shop was pretty nice as well an reasonably priced.  I picked up a shirt and cap and Nicole picked up one of these: 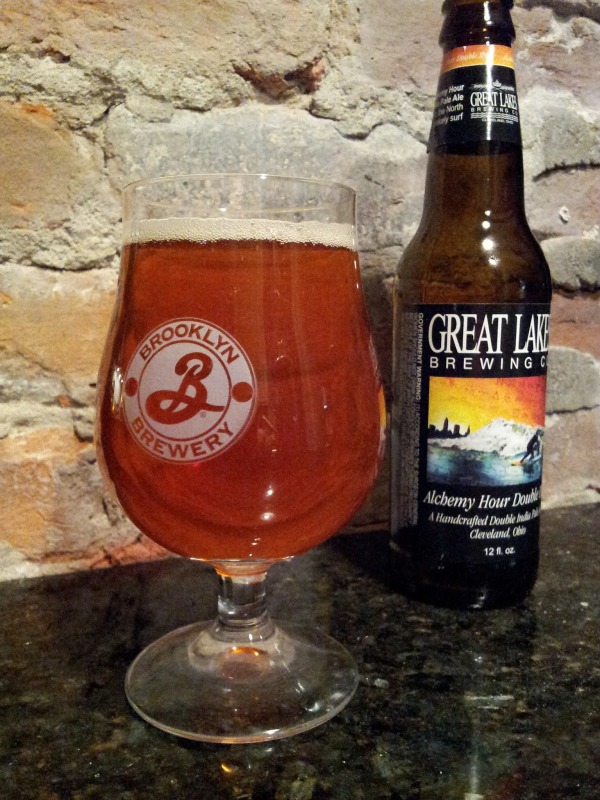 My wife and I were married in Columbus, and immediately after we were pronounced “husband and wife”, we hightailed it to Cleveland and had lunch at the Great Lakes Brewery.  I was never a big fan of their beer, not that it was bad, but more of the fact that they didn’t brew beers that were my style.  The “Commodore IPA” was below average and nothing to really celebrate.  I congratulate them on their most recent brew, “The Alchemy Hour Double IPA”.  If this beer is available in your area and you love IPA’s, this beer deserves a try.  When my step-dad and I sat down to enjoy this beer, we both agreed that there was something about the hop flavor we enjoyed.    At first we thought they used Citra Hops, but we were wrong.  The familiar flavor though came from the Nugget Hops which makes sense because we are also fans of Troeg’s “Nugget Nector”, which is also awesome.  This beer has nice head, awesome color, and a great balance of malt and hop.  I highly recommend that you drink boat loads of it.