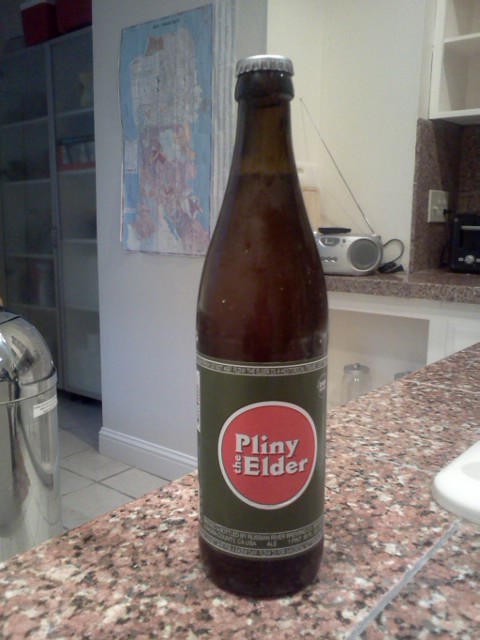 Nicole and I have finally returned home from our vacation with my family over to San Francisco to visit my sister.  The trip was full of laughs, good food, and amazing beers.  I didn’t get to blog as much as I wanted because the 3G coverage was terrible in the city and the wireless internet in the apartment that we stayed at was not working at all.  San Francisco was a beautiful city full of incredible scenery (minus the hippies and the homeless) but I am glad we are finally home. It was definitely a city that is great to visit but I could never live there.  Lets get to the review that I have been eager to do!
Pliny The Elder is regarded by many as being one of the 10 best beers in the world.  My stepfather hyped this beer to me for months leading up to our trip to the point that I started to worry a bit.  Would I still be able to give this a fair review with all of this hype or would I be hit with that mild disappointment that often accompanies heavily hyped things?  It’s sort of like years ago when the “Blair Witch Project” came out.  I was fortunate enough to see this movie without knowing anything about it.  It was the first of its kind to do what it did so it was hard not to praise it however I know many that thought it was stupid and lame, all of which went to see it after hearing the hype.  When we arrived at our apartment in San Francisco, my sister had 2 chilled bottles waiting for us, and the beer was even more impressive than I ever thought.  This was the perfect double I.P.A., no question about it.  The beer pours a hazy golden color with not much head.  I found it to have more carbonation that some of the other double I.P.A.’s I’ve had.  Pliny gives off an incredible aroma of pine with barely a hint of fruit.  It was a little too cold for our first few tastes so the hop explosion was very intense, but as the beer dropped in temperature you could taste every element to this beer perfectly.  An initial hop explosion that leaves a citrus, grapefruit, taste lingering behind with absolutely no undesirable aftertaste.  The only thing that I can find wrong with this beer is that it is incredibly difficult to find.  Places were sold out of it or had limited quantities.  My stepfather was able to come across two stores that had a few bottles left and in each store he took the remaining beers.  If you are ever on the west coast, this beer is a must!