I sent this picture to Al and in a few days, once the renovation check cleared, he started work to see what the problem was.  Nicole and I had to go 3 days without showering and smelled like a couple of hippies, we couldn’t wait to shower!
Al started in the bathroom, tearing apart the area of the tub to be able to see the pipes.  We couldn’t see the leak which meant it was in the floor.  This didn’t sound good.  He ventured into the sun room and cut out a small section of the ceiling where the leak was happening.  There sitting in the ceiling was a big drain pipe that was completely broken.  The owner of the house tried doing a terrible rig job on the pipe that was clearly meant as a temporary cover-up so that he could sell the house.  Super annoying but easier to permanently fix than to do what he tried doing.  He made an attempt to clog the break in the pipe with some foreign substance.  Fail. 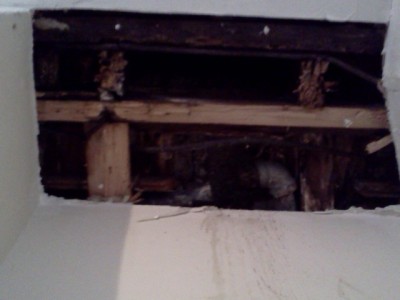 Al was able to repair the pipe and Nicole and I were able to shower.  It’s the little things you take for granted.
This weekend we plan on continuing work in the sun room.  We are going to be doing a lot painting and window repair.  This will be time consuming and it will make it less tempting for us to go out to eat and waste money.  We spent a lot of money the past two weeks so this weekend we are taking it easy.   I plan on replacing another window pain and Nicole is going to do some priming so that we can paint the room.  Taking this house one room at a time is the only way to do this without losing focus and going mad.  Seeing as the sun room is the room we will spend the most time in, it made sense to make this our first priority.   Here are a few “before” pictures. 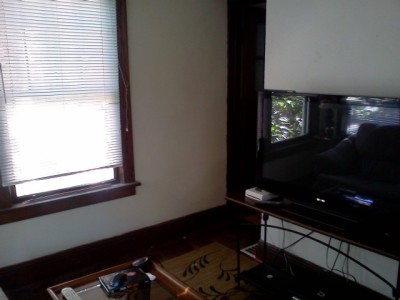 More pictures to come as we make progress!