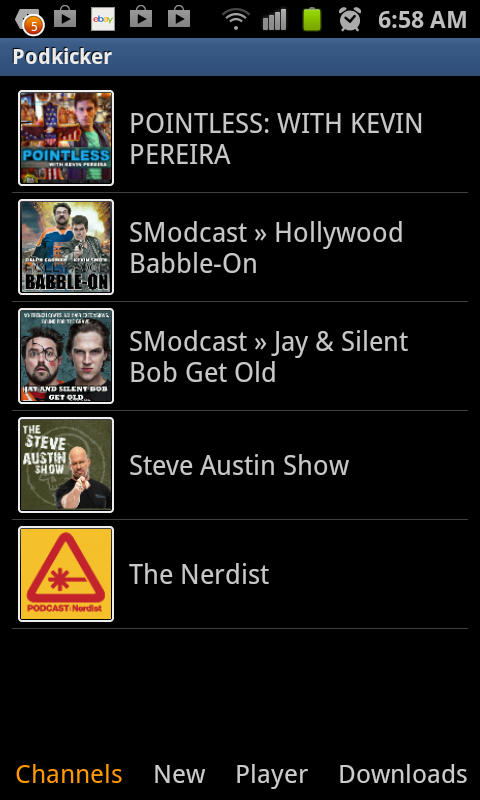 A friend of mine kept telling me to check out Pod-casts, but I never really gave it any thought.  It always seemed like a pain in the ass.  I mean I’m pretty tech savvy, so it wasn’t that I didn’t know how to use pod-casts, it just didn’t seem worth my time, plus in my mind – if you couldnt be on satellite radio or regular radio, than you must just be terrible anyway.  Yeah…I was wrong.  I’m actually finding that its totally opposite. Besides the Stern show, everything on radio is really terrible, and the pod-cast world is just great.  There are so many Pod-cast shows that its hard to tell you what is worth listening to, mainly because you can literally listen to whatever you are interested in.
If you have a smart phone, I suggest getting Podkicker from your app store, its free. Once you get it, its pretty effortless to add Pod-casts:

Some of the pod-casts worth listening to:

The Nerdist:  This pod-cast did it for me.  I listened to one episode and I was hooked.  The show is hosted by the guy that hosts “Talking Dead”, Chris Hardwick, and there are almost 350 episodes archived to listen to.  The show gets a massive amount of guests from big-time music artists, wrestlers, and major actors.  The thing that drew me into this show was the fact that these famous people come on, and they are totally unfiltered.  I’m not sure if they just let it all hang out because they think that nobody is listening to these, or because its a super comfortable format to get interviewed on, but it makes for an entertaining show every time.  Great show, I highly recommend it.

The Steve Austin Show:  You don’t have to be into wrestling to enjoy this show.  Almost everyone knows who Steve Austin is whether its from reality TV, wrestling, or action movies.  The bottom line is, Steve Austin is exactly how he appears in real life as he is on TV.  So to hear him unplugged is really an experience better heard in person, than for me to just tell you on here.  This show is awesome and it will totally get a laugh out of you.

Hollywood Babble-On:   If you are a fan of Kevin Smith, you will love this show or any of the Kevin Smith broadcasts from SModcast.

Obviously there are hundreds of great shows to listen to, but I’ll start with these.  If you do a lot of listening on your ipod, phone, or PC throughout the day, check out some of these.