Today was just like any normal day of work minus an abnormal surge in orders worse than the week before Christmas.  It started earlier in the morning and then continued into the night.  I thought to myself, “Maybe everyone’s buying Valentines Day gifts?”
Around 11 at night I opened my swollen inbox to take a closer look at what was being ordered.  Everyone was ordering my “Are You Afraid of the Dark, Midnight Society” shirt.  Something was up.  I normally don’t sell too many of these.  I decided to email one of my customers to ask them what was going on. They gladly informed me that the shirt made “Buzzfeed” titled, “18 Cool Etsy Products all ’90s Nickelodeon Kids Need Now.”  Number 10!

I’m going to start off in saying that I was not excited to watch this movie and that the trailer for it made it look way worse than it actually was.  Let’s take a look at what this film is about.

“Christopher Lambert and Sean Connery star in the epic tale of immortality that launched one of the most beloved action-adventure series in film and TV history. After Scottish clansman Connor MacLeod (Lambert) discovers his true identity as a member of a legion of immortals, he embarks on a legendary journey spanning continents and centuries, eventually landing in modern-day New York City. Connor faces his ultimate test when other immortals begin to appear in the city, leading to a titanic showdown where only one can claim victory. Directed by Russell Mulcahy and featuring a soundtrack by Queen, this is the modern classic that has attracted millions of warrior fans worldwide. This is HIGHLANDER!” – Amazon

I ended up enjoying this way more than I figured I would.  The movie has its ridiculous moments but it ends up making the film a blast to watch.  In the beginning of the movie, there is an appearance from wrestling legends, “The Fabulous Free-birds”.  Whats hilarious about this scene is that the film makers found it necessary to add sound effects to the punches that were thrown in the match.  The fact that the Queen soundtrack was playing during this scene made it even more ridiculous as you could hear the loud punches during the song.  The whole opening sequence is really sweet.  Right after the opening scene there is a sword fight in the parking garage of the event.  The fight is super long and involves a beheading and several exploding cars, and not one regular civilian strolls into the garage for the entire scene. Hilarious.
The battle scenes from the flashbacks were also really funny.   Two armies do battle and collide clashing swords while doing this unenthusiastic yelling.  It immediately reminded me of those bad civil war reenactments that you see small towns do sometimes.
Kurgan, the lead villain, is supposed to be the most powerful immortal there is.  The actor that played him was so terrible, he was awesome.  He looked like someone that you would see in a gay S&M club in 1984. To add to the ridiculousness of his character, they do a scene where they show that he has a special case that holds his powerful sword.  The sword is in multiple pieces inside of the carrying case because it makes so much sense that a powerful strong sword would be something that you would assemble…

Perhaps the scene that really made me laugh was when Highlander is shown in a flashback meeting up with his wife who in the scene looks different.  Her hair was really disheveled and she had weird white speckles all over her face and giant dark circles under her eyes.  She also had dead-like, code blue lips yet she was being portrayed in a happy scene in a field carrying a baby lamb.  I thought for a second she was supposed to be ill, but that wasn’t the case.  It was just really, really, terrible makeup to show that she was supposed to be an old lady!
Highlander is definitely something that you should see if you have not yet seen it.  I already see some sweet baby onesie ideas for the future.

The Midnight Society T-shirt for fans of “Are You Afraid of the Dark?” is up.  I was going to wait a few days before making it, but once I get something designed, I have to make it immediately.  I can’t wait.  I was initially going to do it on a baby onesie first but decided against it for now.  Its been a while since I’ve posted a new shirt design, so I wanted to get one up for the adults first.  I have also decided to offer this shirt in both guy’s and girl’s sizes. 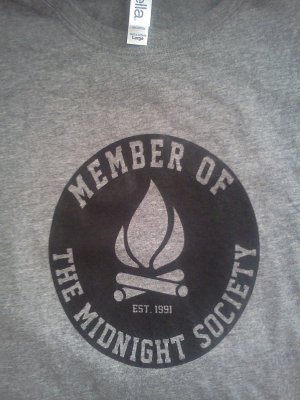 I will have this in a onesie sometime in the next week or two.  Stay tuned, we have some more great shirts coming out! 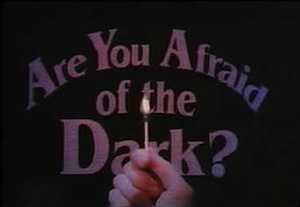 Hello, Hello! I have a new design coming out this week.   Nicole requested an “Are You Afraid of The Dark” themed t-shirt.  After hearing feedback from others also, there were plenty that agreed.  Although I had never watched the show, I gathered some feedback from Nicole and we came up with a pretty cool shirt!  Take a look below at the prototype:

I plan on also releasing this on a baby onesie! Stay tuned!