If you’re a casual fan, you probably know Van Damme from his classics like “Universal Soldier”, “Kickboxer”, “Bloodsport”, etc.  Die hard fans, like myself, have seen everything he’s made, which during the later years have been 80% garbage.  After the release of “JCVD”, Van Damme displayed  (to everyone that saw the movie) that he could act.  His main problem seemed to be the projects he was taking on.  Not all of the in the later year films were like “JCVD”, in fact 99% of them were not.  In  “Assassination Games”,  Van Damme is at his best again.  He is definitely a guy that looks way cooler the older he gets.  He goes from this: 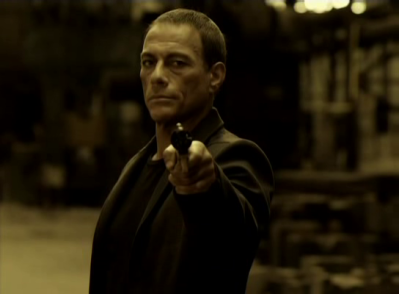 The film stars Scot Adkins and Van Damme.  I’ve never seen Scott Adkins in anything else but I was fairly impressed with him as an action star, he was pretty awesome.  Van Damme and Adkins play two rival assassins, one has a personal history with the target, the other is purely business.  The two have great chemistry and both play their parts perfectly.  Without getting too detailed, the film quality, action scenes, acting, and violence were better then most action films I’ve seen recently.  Its a shame these movies go straight to DVD as I think that people would go to the movies to see action flicks like these.  Instead we get watered down action movies full of teen heartthrobs and bad CGI.  Watch “Assassination Games” if you are in the mood for a good action film, its currently on Netflix streaming.