This weekend was Nicole’s birthday.  My parents came down and took us out to Bambino Bar and Kitchen.  It was fantastic as usual, but this review is about our Saturday night.  I had made us reservations to Bistro Europa on Elmwood Avenue.  This was a restaurant that always made us hate the fact that we were vegetarians.  Its unique, cozy, European look and their constantly changing menu and specials, always sparked our curiosity.  We could never go before because everything on the menu involves some sort of meet or seafood.  No longer being vegetarians, we were eager to try this place out.
We arrived like 15 minutes early.  The inside was artsy and dimly lit.  From the sidewalk outside, its almost impossible to see inside and I was not expecting it to look the way that it did when we got in. 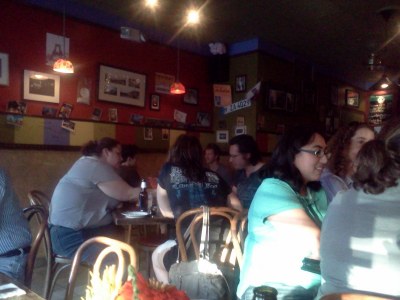 There was a couple that had reservations a few minutes before us and they were in front of us.  They told the women at the bar that they had reservations and the women at the bar said that she was able to seat them immediately.  The people then said that they “wanted to see the menu first”.  So the women handed the couple menus, and then said that she could seat us immediately also.  She said that we could choose whatever table we would like.  So of course we choose the best table in the place, in the corner by the window.  The couple looking at the menu got angry that we chose their table and left.  To that couple who made reservations and then left:

“If you make reservations for a restaurant, please have an idea of what the menu usually consists of before you decide to waste their time.  Otherwise while you are wasting everybody’s time deciding if you want to eat there, Nicole and I will steal your table.”

With that being said, we sat down and ordered a round of beers.  The beer selection was all really great craft bottles.  I started off with The Stone Levitation and Nicole had a Hefeweizen. 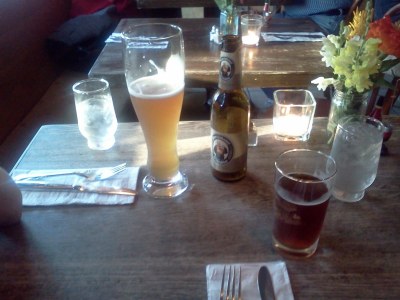 For an appetizer we ordered the cabbage and pork pierogi.  For our entrees, Nicole had ordered the Sea Bass and I had ordered the Steak Frites.  The pierogi arrived in less than 10 minutes.  They were very large and looked amazing.  3 pierogi on a bed of sour cream all seasoned and they looked delicious.  Each pierogi was filled generously with extremely tender shredded pork and cabbage.  These were simply amazing.

They menu states that they serve pierogi, but they do not commit to a specific kind.  The menu at this place changes daily so you never know what your options will be.  Wishing we had placed a double order, we finished our pierogi.  Our entrees came out next.  My steak appeared before me cooked to perfection (medium rare), sliced nicely neighboring a generous portion of home made fries and a tasty looking side salad.
Nicole’s sea bass was really impressive.  She is new to the whole fish thing so her reaction to different species is unpredictable.  She was blown away, every piece of fish and vegetable on her plate melted in her mouth.  She is allergic to shellfish and the original menu item was dressed in a lobster sauce.  The chef was also the owner so he was able to prepare a special sauce for her of his choosing.  If we had to guess it was some sort of orange wine sauce, I could be way off in that assumption but it was awesome.  As she approached the last bite of food on her plate, she just sat there looking at it and said, “I don’t want this fish to be gone.”

Nothing about this dining experience was bad.  Everything from the service to the food was nothing short of amazing.  This was easily one of the best restaurants we have been to in Buffalo.